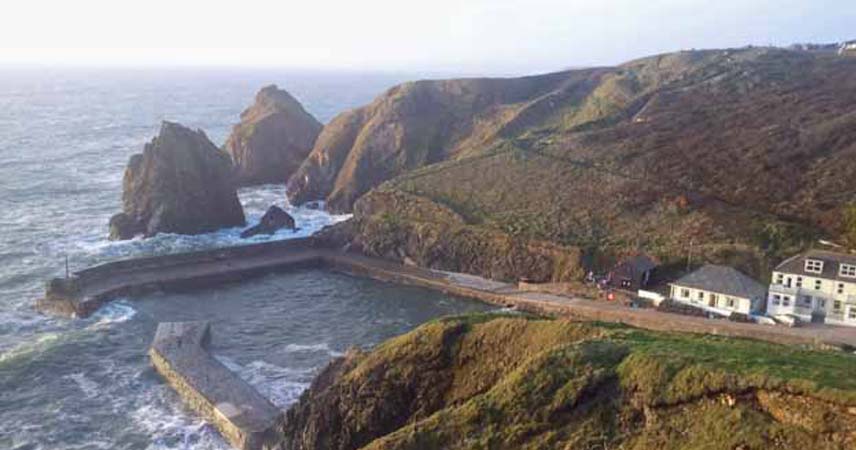 Mullion Cove is a place you might recognise, even if it’s somewhere you haven’t visited. When it’s calm and sunny, it’s a beautiful spot for a picnic, or perhaps a dip in the sea. But when the storms roll in from the Atlantic, Mullion takes on an altogether different character; it’s easy to see why the imposing harbour walls were needed to protect the cove and its fishing fleet.

There are few finer spots in Cornwall than Mullion Cove for wave watching. The anticipation builds as the waves roll in towards the harbour then crash against – and often over – its walls, sending up sheets of spray. There is nothing more exhilarating than feeling the salt spray on your face (from a safe distance, of course!)

The harbour was paid for by Lord Robartes of Lanhydrock and completed in 1895. After several disastrous pilchard seasons, he wanted to try and make life easier for the local fishermen.

Mullion Cove has been looked after by the National Trust since the end of WWII. While tourism is the main trade here now, it’s still a working harbour. Today, the catch is mainly lobsters and crabs rather than pilchards. When you visit, look out for the pots they use to catch them piled up around the harbour.

Mullion village (about a mile and a half away from the cove) is the largest village on the Lizard Peninsula. It’s definitely worth stopping on your way to or from the cove. There are shops, galleries and plenty of places to eat and drink.

There are several walks in the area; the South West Coast Path passes right by Mullion Cove. Kynance Cove lies to the south, and if you go north you’ll reach Gunwalloe.

The coast path takes you along the cliff tops towards, offering great views out to sea. Directly opposite the cove you’ll see Mullion Island, and known locally as Toldhu, which is home to a variety of sea birds, including shags, cormorants, kittiwakes and black-backed gulls.

One of our favourite walks in the area is a circular walk which takes in Mullion Cove, Polurrian Cove and & Poldhu Cove. It’s a short walk of 2.6 miles (4.3km) so it fits in easily to a morning or an afternoon. Most of the walking is fairly easy, but there are some steep stretches. For a dog-friendly lunch stop, try the Old Inn in Mullion.

Alternatively, you could do a slightly longer circular walk from Mullion Cove around Predannack Head (4.5 miles/2.5 hrs). You can find details of walk in Classic Walks Cornwall 1, which you can borrow from the office.

Mullion Cove is on the Lizard Peninsula. From Bosinver, it takes just over an hour by car.