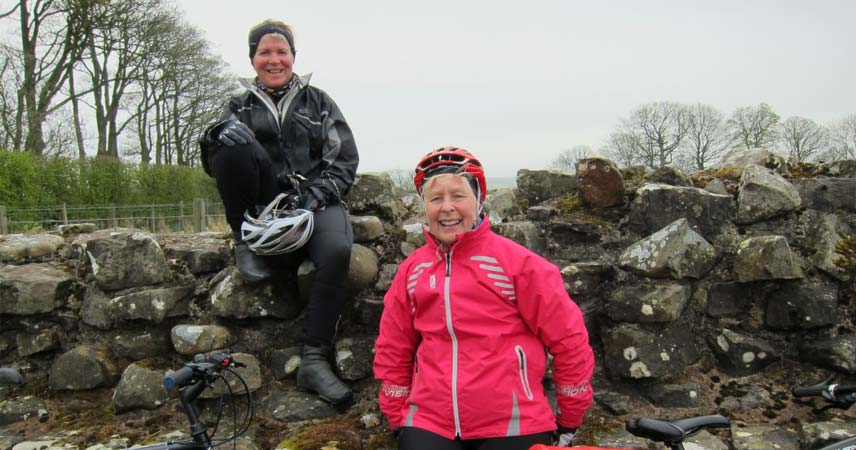 We start with a climb up to Gilsland where we make our first contact with The Wall!
Hadrian’s Wall was built, beginning in 122, to keep Roman Britain safe from hostile attacks from the Picts. It was the northernmost boundary of the Roman empire until early in the fifth century.

The wall, stretching from the North Sea to the Irish Sea (from the Tyne to the Solway), was 80 Roman miles (about 73 modern miles) long, 8-10 feet wide, and 15 feet high. In addition to the wall, the Romans built a system of small forts called milecastles (housing garrisons of up to 60 men) every Roman mile along its entire length, with towers every 1/3 mile. Sixteen larger forts holding from 500 to 1000 troops were built into the wall, with large gates on the north face. To the south of the wall the Romans dug a wide ditch, (vallum), with six foot high earth banks. b Today many of the stones have been carted away and recycled into other buildings, but the wall is still there for people to explore and walk along, although this is discouraged.

This is a beautiful long, straight Roman road with the wall running alongside stretching into the distance near Birdoswald, another Roman fort. It was remarkably well preserved approx 1.5m wide and 2m high. It only exists in certain sections as over the years local farmers have used the stone to build more stone walls, houses and barns but the sight of it here in the open countryside in a long stretch was very impressive.

I wondered what the Roman soldiers must have thought up here in this cold and barren land having left their warm, sunny climate with plentiful food and wine to do their duty defending the Empire from the marauding Scots! A little further along the road we came upon a watch tower where a beacon would have been lit to communicate with other outposts along the wall.

As we continued today, again in glorious sunshine but thankfully without the wind of yesterday, we made a gradual descent into lusher farmland with cows and bullocks as well as sheep – and villages with red brick houses built from the sandstone beneath. The route is delightful here as it meanders alongside the River Eden heading towards Carlisle. We had our first real hiccough of route following here as the signs seemed to take us out of the park and on to the main road. After trying all exits we managed to find the signs back down by the river’s edge and rejoined the 72 heading out towards the west coast through Burgh by sands along the Solway Firth.

Here the scenery changed again to low lying salt flats with long straight roads again with marker board along giving the depth of water when the road flooded. We could clearly see Scotland on the other side of the estuary but unfortunately we couldn’t see a decent pub or restaurant and ended up on the side of the road eating Snickers bars and apples with Janie giving Pete’s legs a good old massage!

We pushed on through Port Carlisle and to the northernmost point at Bowness on Solway where Hadrian’s Wall starts/ends but saw no marker to indicate the exact spot. We were now in the Solway coast area of Outstanding Natural Beauty and an RSPB nature reserve. It was very low lying and bleak and we were challenged by the wind again. We were seeking out a spot somewhere near Newton Arlosh out of the wind so we could meet the 3.15 deadline for our live Radio Cornwall spot. It was found and the interview went well with a guest appearance from our Geordie guide with his beautiful lilting accent!

Now just a cruise down the route through Abbey Town out to the west coast at Silloth, our overnight stop. This was not our favourite spot – a bit dull and sad with its ranks of closed shops. Looking neglected and deserted. We stopped for a welcome drink in the Balmoral hotel to be told that there was nowhere open to eat – they did pizzas but did not recommend them!

We found our B&B – Nith View – the bikes and us were ushered in and had to begrudgingly bargain for a 730 breakfast. Only a shower today so climbed in to soothe those aching muscles but nowhere near such a hard day without the wind and hills of yesterday. We did manage to find food at the only place open – the Hotel Golf and all had the chicken and leek pie, which was good.

Thank you to everyone who kindly sponsored Pat’s cycle ride.

The money she has raised will go to build a bike shed for Children’s Hospice South West, which offers care and support for children with life-limiting conditions and their families. If you would like to donate, go to http://www.chsw.org.uk/cyclechallenge.