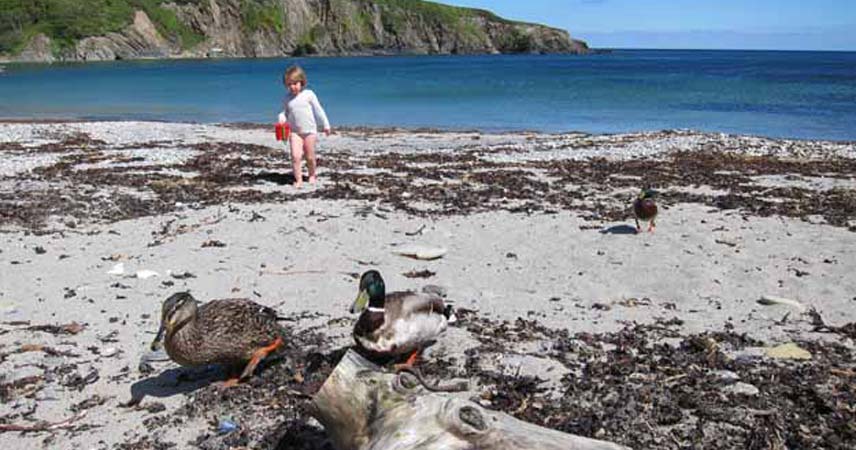 Nanny Pat is on a quest to find the best family days out in Cornwall. On her latest trip, she explored the Polridmouth Cove and the area known as The Gribbin with granddaughter Megan.

Located to the west of Fowey, its sweeping views and secluded beaches make it popular with visitors and locals alike. Pack a picnic and some beach equipment and prepare for some fun!

The path from the car park is laid with stones and easy to walk. Nanny Pat and Megan had great fun doing roly polys down the grassy bank on the way back. They also identified lots of wild flowers – now is definitely the best time of year to see them.

Looking out across St Austell Bay, you might also see the Fowey-Mevagissey ferry , and if you’re lucky, maybe even a dolphin or a basking shark. (We highly recommend the ferry trip – it’s a great way to appreciate the coastline from a different perspective and kids will love the novelty and sense of adventure).

Polridmouth Cove is the setting for Daphne Du Maurier’s Rebecca – literature lovers will enjoy soaking up the ambiance. The ornamental lake alongside the beach has ducks and swans which also take to the sea. Megan was delighted when some very friendly mallards came to help her dig her sandcastle.

The whole day was sheltered, warm and perfect and they virtually had the place to themselves. It’s a great spot for families who are prepared to make the effort and walk a little way from the car park!

One of the highlights of the day was seeing the RNLI lifeboat in action. The lady was in Sandy Cove with her little dog who had fallen and hurt her leg. Nanny Pat and Megan watched excitedly as the action unfold before them.

The lifeboat rib came out of Fowey, nosed into Polridmouth and searched for her, eventually ending up just underneath where Nanny Pat and Megan were standing in Sandy Cove under Gribbin Head! She was helped into the lifeboat and off they went. Every year, the RNLI save hundreds of lives in Cornwall alone, and it was thrilling to see them in action first hand.

Erected in 1832, the Daymark stands 25m high and is one of the Cornwall’s more unusual landmarks. It was built to distinguish the Gribbin Head from St Anthony’s Head. When you approach them from the sea, the two headlands look similar. Ships regularly ran aground in the shallows of St Austell Bay, believing they were sailing into the much deeper waters of Falmouth Bay.

National Trust volunteers will be opening the Daymark up on Sundays throughout the summer (7 July – 15 September, 11am – 5pm). There’s a £1 for adults, but NT members and children are free). The view from the top is truly outstanding – it’s definitely worth the climb!

Things to see and do

There’s lots to explore, with beaches, woodland and a network of footpaths that link up with the South West Coast Path. The area is also full of history. If you look carefully, you might come across the remains of a Bronze Age barrow.

Polridmouth Cove is a 10 minute walk from the car park at Menabilly Farm (just keep going along the top road at Polkerris nr Fowey). For SatNavs, the postcode is PL24 2TN. This has to be one of the cheapest car parks in Cornwall – 50p in an honesty box for a whole day’s parking.