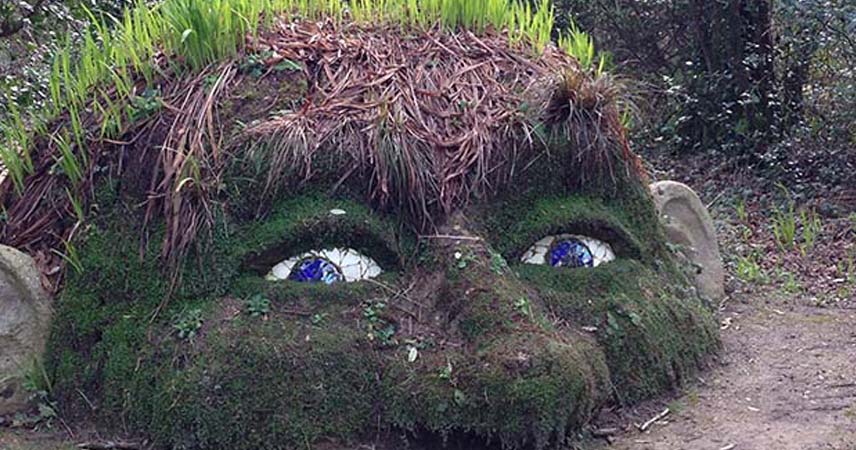 They saw where a large tree had recently fallen down in the storms and broken the bridge.

Before striding across the stepping stones along the jungle walk.

The award-winning gardens at Heligan now extend to 300 acres and visitors can explore Victorian productive gardens where fruit and vegetables are grown, see wildlife in their natural surroundings and learn about lots of different plants and species.

Woodland sculptures, the sleeping mud maid, fungi growing areas and exotic plants make this a very rich sensory world for children to experience. On this particular outing, Wilf and Megan were able to see the fruits of the gardeners’ labours in the from of a huge pile of squashes and pumpkins as Heligan prepared for its harvest display.

The ‘Lost Gardens of Heligan’ were part of the Tremayne Family estate for more than 400 years.

In 1770, Henry Tremayne began to set out plans for the garden and estate at a time when Cornwall was a leading player in the global sea trade. Sailing ships brought back exotic plants from all parts of the world, often first landing them at ports such as nearby Mevagissy. The mild Cornish climate enabled many species to survive their long journey before being transported on to London and other estates. Some of the camellias and rhododendrons at Heligan are thought to be possibly the oldest surviving species to arrive in Britain. Cornwall is certainly home to many rare plants that never made it ‘up country’ or onto the gardens at Kew.

At Heligan there is a Victorian productive garden where a wide variety of fruit and vegetables are grown along the lines of Victorian self-sufficiency. Glasshouses produce oranges and pineapples that were introduced to Heligan in the 1800s. The Jungle Valley has its own micro-climate where all sorts of exotic species are grown such as the impressive tree ferns while the Lost Valley has been developed as a home for wildlife such as deer, otters and recently the Cornish Black Pig.

In 1999, Heligan took over the responsibility for another 200 acres of the estate covering grassland, wetlands, rivers, a small lake and farmland. This area has become an integral part of the Heligan Wild Project which aims to show visitors the sensitive links between land, animals, nature and food production. This makes it a great place for young children to see and enjoy the delights of nature.

– Ask at the guides at the ticket office for the best things for young children to see and do.

“There was lots of room for young children to run around without too many bits fenced off which was very good. Also, the maps were accurate and the signposting helpful. The children greatly enjoyed seeing the Jungle Valley, the giant’s head and the neat rows of plants in the vegetable garden. Definitely a worthwhile trip.”