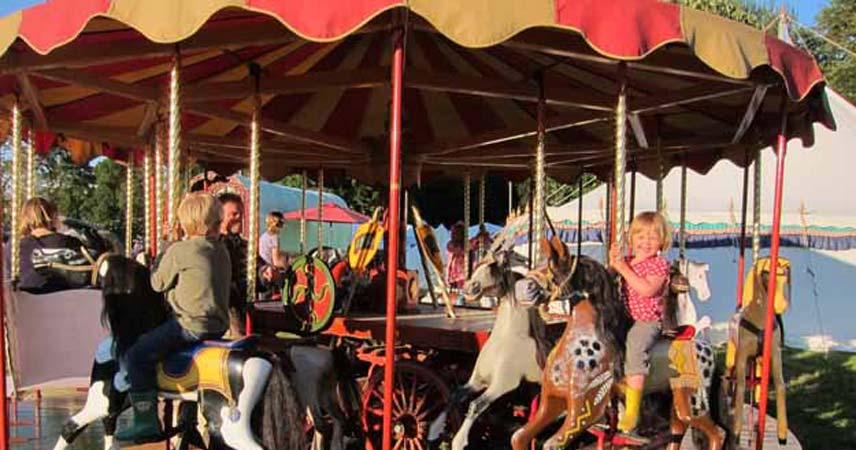 Although Nanny Pat has been to plenty of festivals over the years, she’d never taken the plunge with kids in tow. She chose Port Eliot Festival as her first venture to a weekend music and literature festival with her grandchildren (aged four and two). To make the most of the festival experience, she opted to go for the weekend with the campervan.

Port Eliot Festival is a magical adventure for the whole family, combining music, literature, great food and more. The setting is spectacular, with views of Brunel’s viaduct over the Lynher River and plenty of room to explore.

The festival has attracted some big names over the years (you can get an idea of who’s performed or taken part in previous years on the festival website), but it’s less about seeing particular musicians or authors and more about simply being there and soaking it all up.

There’s no pressure to rush around and feel as though you have to do everything. In fact, some of the best experiences of the festival are more likely to be the ones that just happen: a moment of wonder when the kids discover something unusual around the corner, swimming in the river or stumbling upon an impromptu performance.

What’s on for kids

Children are welcomed with open arms here, and the festival team have thought carefully about creating areas and events with children in mind – there’s a wide range of activities, workshops and entertainment.

There are walled gardens, intriguing pathways, dozens of tents full of things to listen to or make and do and plenty of space to wander, dream, or play hide and seek. Dressing up is encouraged, and you’re likely to meet all sort of interesting characters…

This year, Rogue Theatre (the wonderfully inventive theatre company who did the Wild Woodland Summer Ball in Tehidy Woods) have created something really special for children – The Hullabaloo. It’s a place children won’t want to leave, where adults can relive their childhood and imagination makes everything possible. Based in the Rhododendron Garden beyond the Bowling Green, The Hullabaloo beckons you in to another realm where you can dance with trolls, take tea with a giant and make mischief with the pixies.

Nanny Pat’s verdict: “Port Eliot is so family friendly and there’s masses to do alongside the river. I would definitely go again!”

The next Port Eliot Festival takes place 25- 27 July 2014. There are a variety of ticket options, including day and weekend passes – take a look at the website for more details.

Port Eliot is in St Germans, just off the A38 on the way to Saltash – approximately 45 minutes’ drive from Bosinver. Postcode for SatNavs: PL12 5ND.

There are direct trains to St Germans from St Austell (journey time about 45 minutes) and the station is just a short walk from the Port Eliot Estate, making it an easy day trip from Bosinver.

Have you been to Port Eliot Festival, or any other festivals in Cornwall as a family? We’d love to hear about your experiences. You can leave a comment below or post your thoughts on our Facebook page.