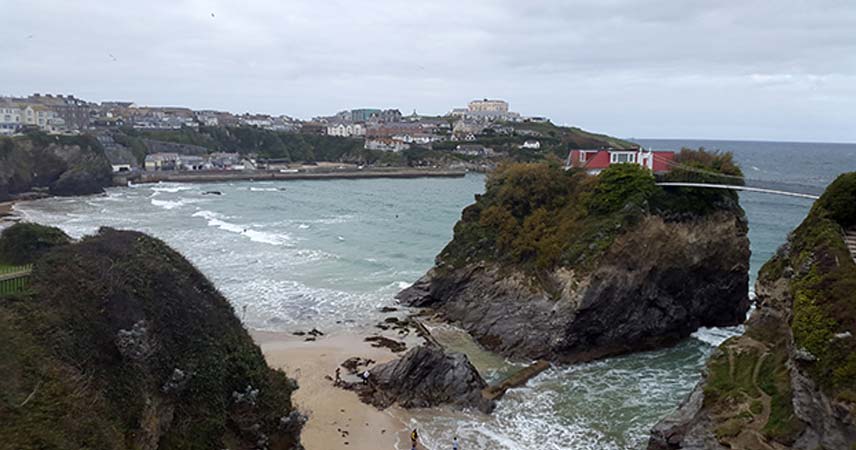 Although I am not Cornish by birth, I have lived the greater part of my life in the county and never tire of exploring it and delving into the many stories of its fascinating history, which shaped the landscape we see today.

My latest foray was a walk around Newquay in the company of two most knowledgeable local people, Jill Anstey (a Blue Badge Guide) and Len Sheppard (from the Newquay Heritage Archive & Museum and Newquay Old Cornwall Society). The Newquay heritage walk was organised by Cornwall 365, which aims to encourage those of us who work in tourism to expand our local knowledge and thus help us to enrich our guests’ appreciation of the county.

The walk began at Trenance Cottages, near Trenance Boating Lake and Newquay Zoo. The cottages have recently been restored as part of a community-led project funded by the Heritage Lottery Fund, and are now open to visit for free and step back in time to see how they would have looked in 1870. There is a wonderful cafe at one end of the building – they do an excellent cream tea!

Our walk began with a look at the stone viaduct which looms over the valley, the last of three on that site, each larger and stronger than the previous one. The original viaduct carried a mineral tramway built by Joseph Treffry, a wealthy landowner who had extensive mineral workings inland. He needed a port on the north coast to rival the Rashleigh family’s Charlestown to export minerals and china clay and to enable him to import coal from South Wales to drive his mine engines.

Over time the horse drawn trucks were replaced by a steam driven railway line which was to change Newquay from a tiny fishing port to a thriving holiday resort. Carriages were packed with holiday makers coming down from Brunel’s Great Western Line at Par, following the trend for taking the seaside air and drinking the mineral waters.This branch line still carries passengers to and from Newquay today, following the original route through the World Heritage Site in the Luxulyan Valley – well worth a trip, as you arrive in the centre of town close to the beaches.

Our walk continued to the station and the lovely little ‘green lane’ following the old track (now removed) along past Towan beach, the island and the old lifeboat house down to the harbour. We learned about the pilchard industry which was Newquay’s lifeblood in the mid 1800s, with virtually everyone in the town having a family member involved. There were a number of fish cellars strung all along the coast here, each with fascinating names: Fly, Active Good Intent and Speculation. They were not cellars but large buildings where the pilchards were processed, salted and packed into large wooden barrels called hogsheads, each containing 2,000-2,500 pilchards.

Where Sainsbury’s supermarket now stands was the end of the line and a tunnel was dug down to the harbour. The trucks full of clay and minerals were let down by whim engines to the quays and horses would tow them to be tipped into the waiting ships’ holds. You can still see the arch shaped door on the end of the tunnel next to Newquay Rowing Club and the beautiful handcrafted racing gigs in the shed alongside bear the names of the original fish cellars.

Above the harbour out on the headland is the famous white painted landmark of the Huer’s Hut. A three man team would take turns to gaze out to sea to spot the vast shoals of pilchards that swept down the coastline from the north. When he had spotted a shoal the Huer blew a loud horn and the whole town stopped dead in its tracks and ran to their boats with seine nets to take their share of the bounty. The pilchard boom finished about 1880 when the shoals dwindled to uneconomic levels. They are still caught today but appear on restaurant menus as Cornish sardines.

We finished our walk at the lifeboat houses near Cornish architect Silvanus Trevail’s Headland Hotel, a spectacular building from the heyday of Victorian splendour with spectacular views of the coastline. I felt a little closer to the lives of the people who had shaped the town and the reasons why. Now I am passing it on!

Stop Press! Trenance Gardens are holding their Christmas Craft Fair at Trenance Cottages from 10am – 4pm on Sat 14th and Sun 15th November with music, mulled wine and crafts from leading Cornish craft makers. Yet another reason to visit!

Traces of the past can be found all over Cornwall. Where’s your favourite place to visit, and why? Leave a comment below, post on our Facebook page or tweet @bosinver – we’d love to hear your thoughts!