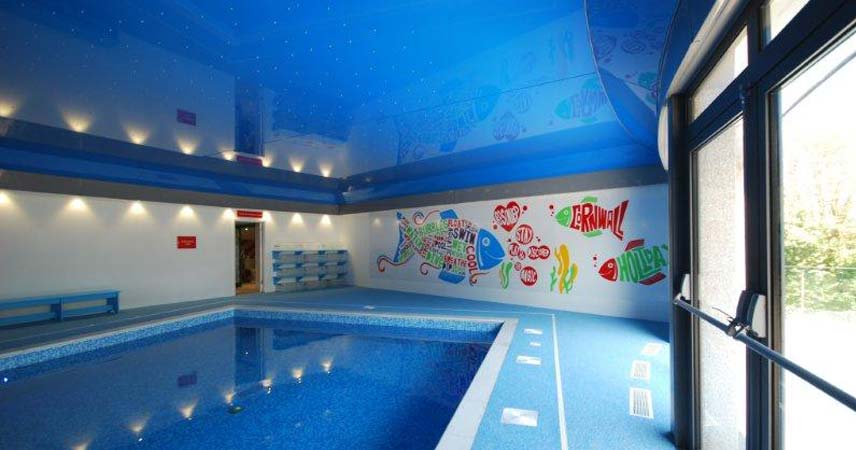 More than fifty guests from businesses all over Cornwall gathered at Bosinver on Thursday 19th September to celebrate the official opening of our new indoor swimming pool.

It was such a major project for us, we wanted to invite all the craftsmen and suppliers involved in the various stages of building of the pool to get together and see the fantastic finished result.

The day was also a chance for local businesses to look around the site and talk to Mark Smith of ZLC Energy about the cutting-edge renewable technologies used in the building – and to try out the pool themselves.

As it was a celebration of an environmentally friendly building, we were delighted that local conservationist Brigit Strawbridge was able to join us to perform the official ribbon-cutting in front of an audience that included Malcolm Bell, head of Visit Cornwall, and colleagues from across Cornwall’s tourism industry.

I’m thrilled that so many people were able to come along and share this special event with us,” said Pat. “The new indoor pool has been a major project for our small team.”

Malcolm Bell said he admired Pat and Dave Smith greatly for creating the holiday haven that Bosinver has become. “This really is a case of Bosinver setting the very highest standards of quality and sustainability yet again,” he said. “Pat and Dave have been beacons of inspiration in Cornwall’s tourism industry for a long time and, as this new pool proves, continue to lead from the front.”

Despite the rather drizzly weather a great day was had by all (you could say it went swimmingly!) and everyone agreed that the new indoor pool is fantastic, making Bosinver an even better place to stay all year round, whatever the weather!

For more photos of the day see Bosinver’s Holidays in Cornwall Facebook page and for more details of the building of the pool visit Bosinver’s swimming pool webpage.