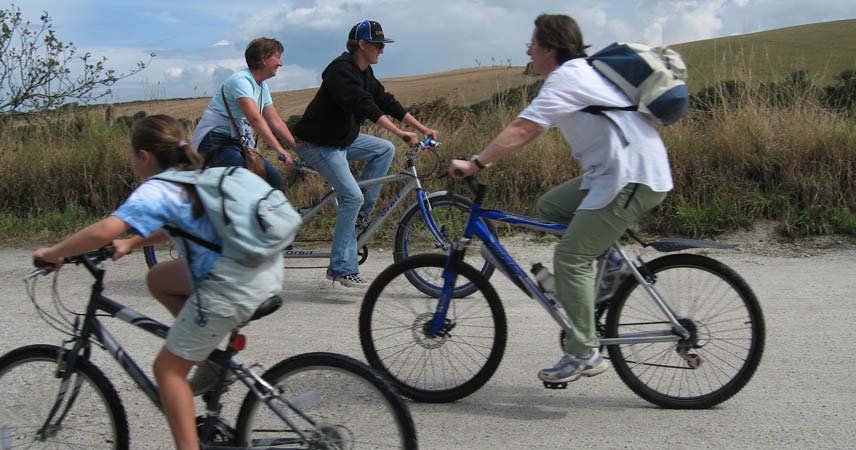 Tracey Findlow and her family recently returned Bosinver for the third time. But a lot’s changed since they were here in 2010.

Tracey’s lost an impressive 12 stone – and she says it was coming to Bosinver that inspired her to lose weight. “Last year when we came to Bosinver I was as size 32 and on crutches because I’d damaged the cartilidge in my left knee. There was so much I missed out on. When we booked our next holiday at Bosinver for 2012 I made a vow that by the time we returned I’d have lost a lot of weight and got my knee sorted.”

Not only did Tracey plan to lose weight, she also set herself another goal to achieve – to cycle the Camel Trail with her family. Last week they did it – all 38 miles of it.

Tracey explained: “I’m one of those people who’s all or nothing. Once I’d made the decision I had to go the whole hog.”

She lost 2 stone in the first two weeks, despite not being able to exercise.To start with she did the Celebrity Slim Shake 8 week challenge, then moved on a low carb diet she created herself based around fruit, veg, eggs fish and meat with lots of water and green tea. “Instead of eating, I did lots of reseach on the internet!”

Once she’d lost half her target weight, Tracey joined the gym – for the first time ever. Now she’s gone from hating exercise to wanting to get up early and go for a run before everyone else is up. She’s also discovered a love of swimming and covers a mile in the pool (64 lengths) every weekday.

“When I set my goal, I didn’t even dream it would happen. Back then I couldn’t imagine I would look like I do now. Because we’re here at Bosinver now it’s just started to sink in.

I haven’t quite reached my goal – I’ve still got about 7 lbs left to lose, but I’m nearly there! My goal now is to keep it off and lose a little bit more. By the time we come to Bosinver next year I want to drop another dress size.

I can imagine coming back here for the next few years. It’s perfectly situated, and there’s so much to do. I feel like I’m reliving my childhood through Lucy – especially now I’ve got more energy to keep up with her.”

Having a go on our zip wire was also on Tracey’s wish list – and another goal she achieved this year.

1. Setting yourself a goal is really important
2. Drink lots of water – aim for 2 litres a day. Often you think you’re hungry when actually you’re just thirsty
3. Plan what you’re going to cook three days in advance
4. Get rid of your bigger clothes as soon as you start losing weight
5. Find a type of exercise you enjoy – that way you’re more likely to stick to it
6. Don’t give up! It can take a while but just keep your goal in sight.

Congratulations Tracey! We’re so pleased you’ve reached your goal, and thanks for sharing your story and photos with us. It’s been truly inspirational.