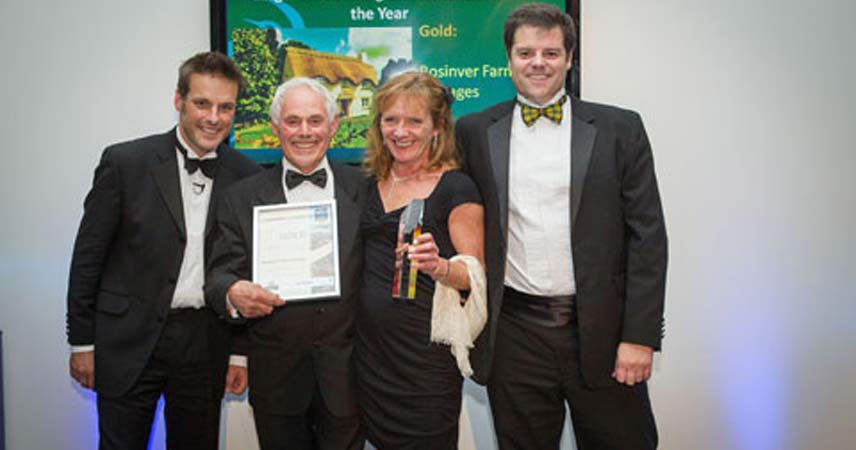 10 NovBosinver at the 2012 Cornwall Tourism Awards

On Thursday, 8 November, the 2012 Cornwall Tourism Awards were held at the prestigious Headland Hotel in Newquay. Pat was abroad being Nanny Pat, babysitting her grandchildren on a lovely family holiday, so Helen and Farmer Dave got all togged up James Bond style (the name’s Dave…Farmer Dave) and headed off for the evening to represent the team at Bosinver.

The nominations were announced a few weeks ago and as we won a Gold award last year and were up against some very strong competition this year we weren’t really expecting to clinch the top spot again, as to do that would be rather a tall order – but we went along anyway for a jolly good evening to celebrate all that’s great about Cornwall Tourism.

The evening began with a reception of canapés and delicious sparkling wine from Cornwall’s renowned Camel Valley Wines and a spectacular tethered hot air balloon display on the Headland Hotel patio. Then it was time for the fantastic 3 course black tie dinner. The host for the evening was West Country wildlife expert and TV presenter Nick Baker, who thankfully left his favourite bugs at home, but entertained everyone with tales of some interesting Cornish wildlife including the Cornish suckerfish.

We were lucky enough to be put on a table with some folk from the Trenython Manor Hotel who were great fun – by the end of the evening Cindy had been adopted by Helen as a surrogate daughter! In fact so much fun was had at times it was difficult to hear the results as they were announced! There were some very worthy winners of the various categories, particularly Kneehigh Theatre who gained the Best Tourism Activity, Sport & Experience award for their summer Asylum programme – the only purpose built theatre tent of its kind and a multi-sensory Cornish experience like no other!

Eventually it was time for the announcement of our nominated category. The tension mounted as first the Bronze and then Sliver award winners received their awards. Finally the winner was announced – Bosinver had won the Gold Large Self Catering Establishment of the Year award… again!

Helen and Dave went up to collect their beautiful glass trophy and framed certificate from Nick Baker and were told that Bosinver had deserved the award because “Bosinver ticks many excellence boxes, from the on-site facilities, the green ethos, the kids’ activities and the guests’ happiness when walking around.” We are thrilled that the judges recognised the hard work that all of the team put in and the fact that so many of our guests love it here and keep coming back.

So while Nanny Pat was flying high in the sky returning from her break (literally as the awards were being announced!), the rest of us here at Bosinver are flying high with pride at being part of such a magical place.