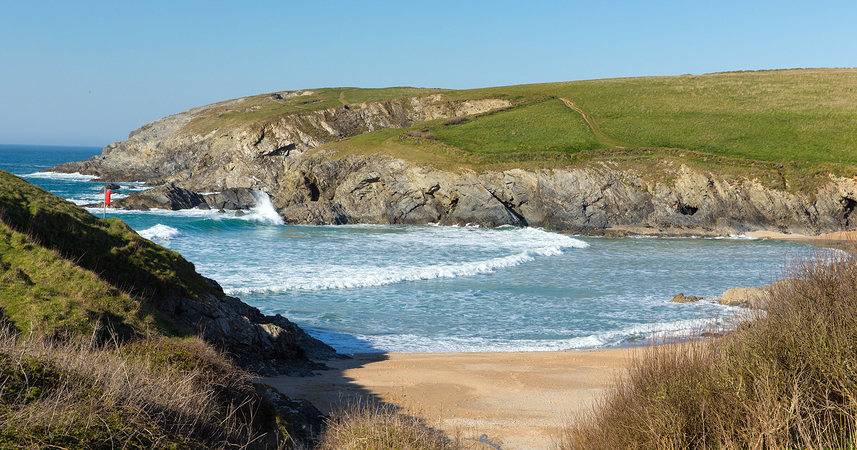 This easy six mile walk via Polly Joke beach on the north coast takes about two hours to complete. It takes you past some truly spectacular scenery on the north coast of Cornwall, including Holywell Bay where the latest BBC Poldark series is often filmed.

Head for Cubert village and take the road to West Pentire (you can find full details of the walk and where to park on the National Trust website). Park in the car park alongside the Bowgie Inn and take in the spectacular vista of Crantock beach and the Gannel Estuary extending right up to Trevose Head lighthouse in the far distance.

This is the North Cornwall coast at its windswept best. The wild Atlantic Ocean stretches before you, powerful and elemental, rooting you to time and place and reflecting on how beautiful nature can be.

The walk heads west past Vugga Cove and Pentire Point descending into the hidden gem of a beach Porth Joke beach (locally known as Polly Joke). This beach can only be accessed by foot from the car park at Treago Farm so is never overcrowded and mostly used by locals. On this occasion a family of seals were playing in the waves just offshore, almost playing hide and seek with us as we made our way across the beach towards Kelsey Head.

From here we headed on to Holywell Bay, yet another sweep of golden sand, backed by beautiful dunes and on most days, dotted with surfers all trying to catch the best waves. Here the path turns inland through the sand dunes which are home to a multitude of insects – butterflies and crickets abound. This area is known as the Kelseys, a site of Special Scientific Interest and a protected area noted for its biological interest.

The common here is a popular spot for photographers in the summer as it is often carpeted with poppies and corn marigolds in the summer.  We headed towards it, crossing the bridge at Porth Joke then turning inland up the hill. These are the meadows managed ‘in house’ by the National Trust for their arable flora. A short climb up the hill brings you back to the car park at West Pentire.

By this time we’d worked up an appetite, we stopped for lunch at the Bowgie Inn, a local favourite pub which offers stunning views over Crantock and the Gannel beyond it.