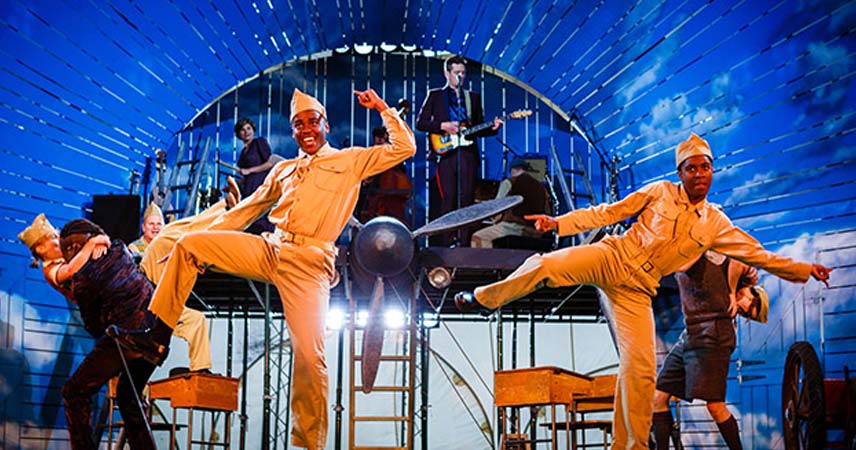 This year’s Kneehigh production is again in their wonderful theatre tent called the Asylum pitched in the fields alongside the Lost Gardens of Heligan. There is delicious BBQ food and drink in the Asylum bar. My advice is to arrive reasonably early (from 6pm) as there is always something quirky to see or listen to and it’s a great place to share some relaxed food and drink with friends before the performance.

I am a total Kneehigh Theatre addict and have seen most of their productions since they began back in 1980. They are rooted in Cornwall and they have its wildness and free spirit running in their theatrical bones. The performances are original, often irreverent but always thought provoking and spirit moving. Both children and adults watch with mouths agape at the actors’ ability to move you from joy to sadness, hope to despair, surprise to reassurance but always with originality and mind boggling stagecraft skills, sets and their own brand of infectious musical accompaniment.

946 is and adaptation of Michael Morpurgo’s book, ‘The Amazing Story of Adolphus Tips’. It is set in Slapton Sands in 1944 and details the evacuation of Devon villagers from their homes to enable American soldiers to practise for the D Day landings. They use puppetry and a small team of talented, versatile and musical actors to tell a tale of war, prejudice and love, finally revealing the secrets that the US and British governments tried to keep quiet.

Go and see it, share it with your friends and family. You will not be disappointed and will be talking and thinking about it for some time.

Kneehigh’s next production is an adaptation of Daphne Du Maurier’s Rebecca, which will be performed at Hall for Cornwall, Truro 9- 19 September 2015 before going on tour around the UK.